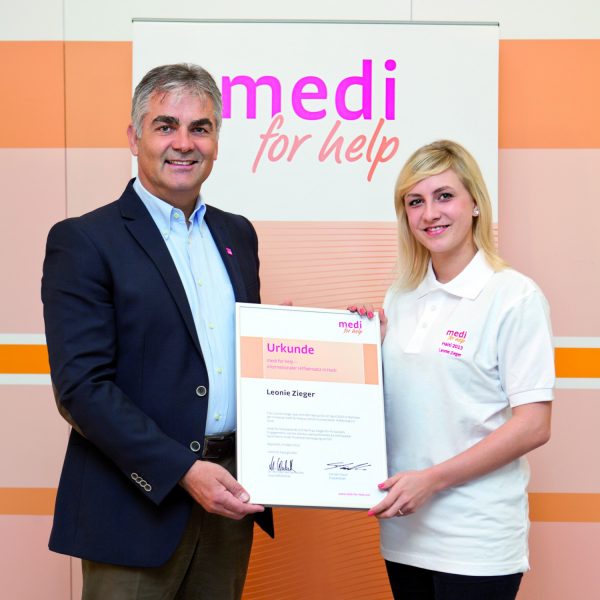 Volunteers who work free of charge for the relief project medi for help (mfh) usually stay in Deschapelles for two to three weeks. Leonie Zieger (25) stayed for two whole months. The young lady from Dortmund didn’t only look after patients with lower limb prostheses during that time, she also ran the mfh workshop for three weeks. After her return she told us about the experiences she had there, and about the special challenges she had faced.

Ms Zieger, how did you find out about medi for help?

I’ve had always been interested in intercultural projects. That’s why I trawled the Internet looking for interesting jobs. However, I soon found out that orthopaedic technicians are not much sought after. When I came across the medi for help homepage I was quickly convinced by the project. In my eyes, the aim of helping people to help themselves is the most important approach. That’s why I committed myself to mfh.

What did your family and your employer say about that?

While my mother found the idea of helping in Haiti good straight away, my father was more sceptical. The reports coming in from Haiti did not exactly prompt him to jump for joy. But his reservations receded with time and eventually he gave me his full support. As a self-employed master orthopaedic technician he even gave me a crash course in arm amputation techniques and paid for the plane tickets. Many thanks again for all that (also from the whole mfh team, Ed.)!

You worked as a volunteer in Haiti between 3 February and 4 April. Was it as you had expected?

To be quite honest I must say that it was a real culture shock for me at first. You try to prepare for such a task as well as you can in advance, but I was not only surprised by the extent of the poverty, I also had to get used to how the individual Haitians reacted. For example, children who were afraid of me and cried because they had never seen a white woman before; that was one moment I was utterly unprepared for.
On the other hand, I was pleasantly surprised by the friendly and relaxed way the workshop team accepted me. I had been expecting certain prejudices. But it was not like that at all, and the atmosphere at work was great. Even when I took over the running of the workshop for a few weeks the other four technicians accepted me as the workshop manager right away. I’m very grateful to the team for that.

How should we imagine your everyday routine?

At 7 o’clock we had our daily Medical Meeting in the library of the neighbouring hospital. We met up with doctors, medical managers and physiotherapists to exchange experience. That’s how my day usually started. I learned a lot about the injuries and treatment methods. They also held interesting lectures about various medical fields. Around 8 I was then in the workshop and started my daily work. We had to adjust prostheses and make plaster casts, orthoses or prostheses. Patient treatment ended officially at about four-thirty. After that we usually poured out the plaster casts or modelled the blanks. We stopped work around six.

Were there still many earthquake victims who had to be fitted with their first prostheses?

Yes, there were in fact still a few individual people who had not been provided with leg prostheses after the earthquake in 2010. But these cases are now in the minority. These days road traffic accident victims account for about half the patients. These are joined by many diabetics whose lower limbs have been amputated due to dietary deficiencies.

What particular challenges did you face on the island?

I well remember a lady who was dead against being treated by me. The patients simply could not imagine being given a prosthesis by a white woman. You have to put up with that. A Haitian colleague looked after her instead.

You were also responsible for the workshop for three weeks. How did you find that?

As I said at the beginning, my Haitian colleagues had no problems with having a woman as their boss. Thanks to the constant replacement of the volunteers, many of whom are women, they know it’s normal in Western countries for men and women to be treated equally and to work together. Furthermore, during the first four weeks I had enough time to find my way around the workshop and get to know the team.

What were the most remarkable events in Haiti?

A little lad, about two years old, visited us one day in the workshop. His leg had been severed in a motorbike accident. We fitted him with a knee disarticulation prosthesis. But we didn’t have the right PE sheets for deep drawing. So we had to improvise. We joined two sheets together by heating them one on top of the other in the oven. That worked perfectly. It was an unbelievably wonderful moment to see the young lad taking his first few steps with his prosthesis.
My contacts with a team of American surgeons also had an interesting outcome. The team allowed me to assist at a leg amputation and gain insights into the surgical technique. After the operation I did all that was necessary to provide the young man with his leg prosthesis right up to the trial fitting in hospital. Here again, the patient’s first successful attempts at walking were very moving. Both wonderful experiences that taught me so much.

How has the “medi for help” project affected your attitude toward your profession and life in general?

The relevance of problems has shifted. Many things that are seen as problems here in Germany are mostly nothing in contrast to the challenges in Haiti. That’s remarkable when you see how easy-going the Haitians are and how much they enjoy life. I hope I can keep at least some of this attitude going for a long time.

How would you summarise your time in Haiti?

Absolutely positive. I was able to assume great responsibility after such a short time, I learned a lot, and gained valuable experience. In my thoughts I’m still in Haiti with my patients and the fantastic team that gave me such a warm welcome and with whom I shared so many wonderful moments.

Would you travel to a disaster area again to help out?

Yes: without any reservations!

Dear Ms Zieger, many thanks for the interview and your work in Haiti. The whole mfh team wishes you all the best for the future.

Leonie Zieger did her orthopaedic technician training with the mediteam in Bamberg. She has already worked aboard in Marseille and Toulon. Starting in August she will be taking the parts 3 and 4 of the master examination at the chamber of trade and commerce in Dortmund. 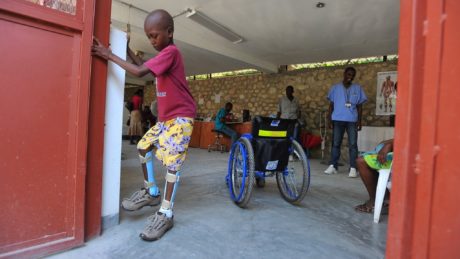 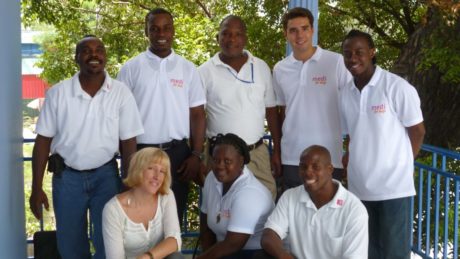 Cornelia Köhler is the new workshop manager for medi for help